IELTS Writing test is one of the tests of the English language which is judged on the basis of four parameters that is, task achievement, cohesion and coherence, lexical resources and Grammatical Range and Accuracy. IELTS writing task 1 (academic) is about report writing where an illustration will be given and a student is expected to write 150 words.

In Task 1 of the writing test, trends are needed to be described, compare and contrast is to be done, a process is needed to be written and a report is to be generated on statistical information. However, in this article, tips and vocabulary to describe trends will be discussed in detail along with some useful examples.

A trend is basically a general direction in which some variable is developing or changing over a time period. It is usually illustrated in the form of line and bar graphs, a pie chart or a table A trend can be anything. Whether it can go up or down or maybe there would be no change. So students need to be very careful in describing a type of variation.

The Pattern of Writing a Task 1 (Report)

ii. (The prices of oil inclined over the time period).

ii. (The prices of oil plunged over the time period).

3. For describing a stable trend

ii. (The prices of oil remained constant over time).

4. For describing any major or minor trend

ii. (The enrollments fell sharply in given time period).

2. To describe a minor increase/decrease

3. To describe a key trend

ii. (A considerable downfall can be seen in the revenues in the time period of a decade).

For Describing the Overall Trend

There is a range of different vocabulary for describing percentages or fractions in order to differentiate the regular monotonous figures and to show the change effectively in a report.

One can also describe the adverbs in between

A Sample Question and Answer

The bar chart below shows the average duration of housework women did (unemployed, part-time employed and full-time) when compared to men who had full-time work in the UK between 1985 and 2005.

Summarise the information by selecting and reporting the main features, and make comparisons where relevant. 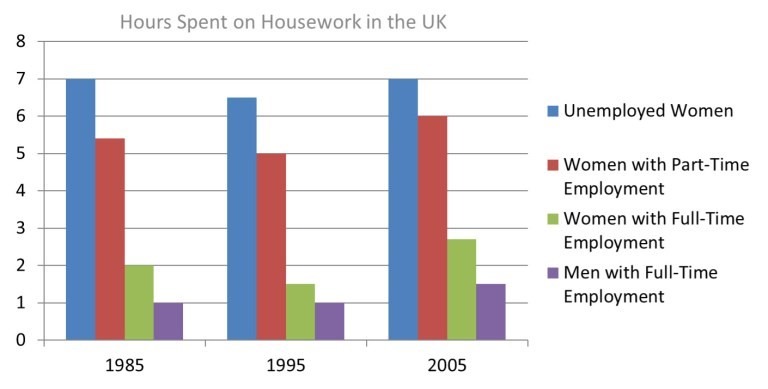 The bar chart details hours of housework completed in the UK from 1985 to 2005 by fully employed males and females with various states of employment. Looking from an overall perspective, it is readily apparent that time spent on housework rose for all groups with the exception of unemployed women, which was stable overall. However, the latter category undertook by far the most housework, while men with full-time jobs did comparatively little.

Women with part-time employment were slightly lower than their unemployed counterparts throughout the period, beginning at 5.3 hours in 1985, before declining to 5 hours over the next 5 years, and then finishing the period with a surge to 6 hours. The figures for women with full-time employment resembled those of men, though they were marginally higher at 2, 1.5, and 2.8 hours in 1985, 1995, and 2005, respectively.

Writing task 1 is a task that should not take more than 20 minutes in total. It is all about writing and presenting the facts given in an effective vocabulary. Interpretations should be varied and accurate and no personal assumptions are required. Use the above-given vocabulary for describing trends and practice for more graphs and charts/tables.

Unable to Login? We are here - bdsedtech@gmail.com
shopping_cart Cart ( Items )
There are no items in your cart